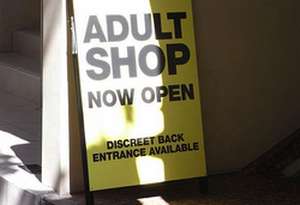 Bay of Plenty Times 20 Feb 2012
Residents in the Tauranga suburb of Greerton are upset they’ll soon be sharing their “family suburb” with an adult entertainment shop. A former police youth aid officer has hit back at the critics, who have condemned him for setting up Aristocrat Adult Boutique, on Chadwick Rd near Greerton Village School.

…Mr McCoy said there was nothing in Aristocrat Adult Boutique that wasn’t available for sale or viewing in local DVD shops, magazine retailers, and supermarkets. Even adult toys were available in some chemists, he claimed. However, a Tauranga father, who spoke on the condition he wasn’t named, said he didn’t think it was appropriate an adult store was set up 100m away from Greerton Village School.
http://www.bayofplentytimes.co.nz/news/sex-shop-moving-near-school-shocks-locals/1277714/