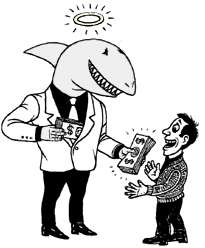 Stuff.co.nz 13 May 2013
There is no silver bullet for dealing with loan sharks but proposed changes will help, Consumer Affairs Minister Craig Foss says. While Labour has unveiled plans introduce low- and zero-interest loans in a bid to stamp out lending by unscrupulous loan sharks, Foss has defended the Government’s own initiative. Foss said the Credit Contracts and Consumer Finance Amendment Bill would require lenders to act responsibly, give consumers the information they needed and introduce significant consequences for those who breached the law. “Lenders will have to take responsibility for the likely effect of the credit they provide,” he said. The Government also announced an extra $1.5 million for budgetary advice services, Foss said. “There is no silver bullet here,” he said. “Changes in the Bill are part of the solution, as are budget-advisory services and the Government’s on-going commitment to improve financial literacy in New Zealand.”

Labour says the changes do not go far enough. Social development spokeswoman Jacinda Ardern and consumer affairs spokeswoman Carol Beaumont have teamed up to promote the party’s social lending policy. Largely based on an Australian model, it would see a Labour government working with banks and community organisations to provide low- or no-interest loans to people shut out of the mainstream credit market. Applicants would have to meet a number of criteria.
http://www.stuff.co.nz/national/politics/8663684/Lending-bill-falls-short-says-Labour