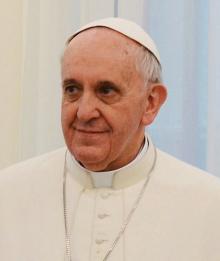 CNS News 21 May 2014
Although Pope Francis was praised for his “who am I to judge?” comment about gay individuals and was named Person of the Year by the homosexual magazine The Advocate in 2013, the Pope has rejected the idea of same-sex marriage as an “anthropological regression” and stressed that  when it comes to adoption, “every person needs a male father and a female mother.”

Pope Francis explained his views on these hot-button issues in his book, On Heaven and Earth: Pope Francis on Faith, Family, and the Church in the Twenty-First Century, which he co-wrote with Rabbi Abraham Skorka in 2010 and which was republished after the then-Argentine cardinal was elected to the papacy in March 2013.

The book is a dialogue between Skorka and the future Pope and includes a chapter on same-sex marriage, which is where the pontiff also talks about adoption.

Skorka first explains that Judaism “prohibits sexual relations between two men” and then expresses worry about how a proposed gay-marriage law in Argentina could change “the core values of our society.”

Pope Francis (then-Cardinal Jorge Bergoglio) says, “I have the exact  same opinion; in order to define it I would use the expression  ‘anthropologic regression,’ a weakening of the [marriage] institution  that is thousands of years old and that was forged according to nature  and anthropology.”
http://www.cnsnews.com/news/article/michael-w-chapman/pope-francis-against-gay-adoption-every-person-needs-male-father-and