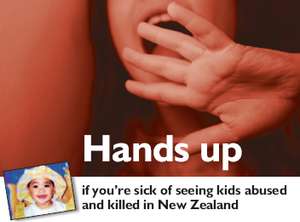 NZ Herald 13 January 2015
The majority of children admitted to the Starship hospital as the result of suspected abuse or neglect are under 1 year old.

Figures provided to the Herald under the Official Information Act reveal three children died at the hospital and 130 suspected abuse cases were referred to police between July 1, 2013, and June 30 last year, compared with one death and 122 referrals in 2012/13.

The median age of the children admitted for abuse – or neglect-related injuries was just 5 months.

“About 20 per cent of these children have other fractures as well, especially rib fractures.

“Outpatients – usually brought in by CYF [Child, Youth and Family] or the police – are usually older children who present with soft-tissue injuries: black eyes, bruising, patterned marks from being slapped or struck with an object.”

Dr Kelly said the perpetrator of the abuse was “very variable”.

“Like most centres, our anecdotal experience is that male offenders are more common than female offenders, and non-biologically related males – ‘stepfathers’ – are disproportionately represented,” he said.